I'm almost embarrassed to share this idea.  In fact, I didn't share it a year ago at this time of year for that very reason.  It's really rather simple and nothing fancy, but very few things in my room are.  Not that there's anything wrong with fancy.  It's just not the way I typically roll.  Simple, but hopefully effective, is what tends to dictate my classroom practices.


We've been learning about presidents and certain symbols of our country for a few weeks, and my kids take notes about their learning.  This is the little speech I repeatedly give them...

"When we put so much information into our schema files, they get so full that sometimes things fall out.  Kids in high school and college have this problem too, so they take notes about all the things they're putting in their schema files.  When they write about the things they are learning, it helps glue them into their files.  So today you get to be like high school and college kids and take notes too."  Yeah, they think they're pretty cool.

I expect each of them to write two things they learned about the topic.  Then I double dog dare them.  If they write more than two, they officially become an expert or historian about the topic.  Again, they think they're pretty cool.

In addition to content, I stress capitals and punctuation, which aren't things that I typically stress during writing workshop when we're more focused on developing content and ideas.

Here are pictures of some of their notes. 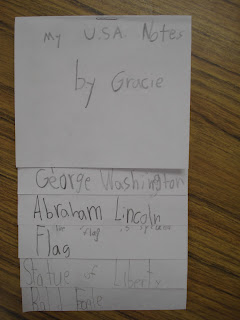 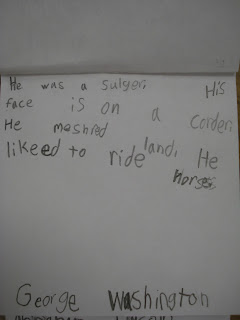 He was a soldier.  His face is on a quarter.  He measured land.  He  liked to ride horses. 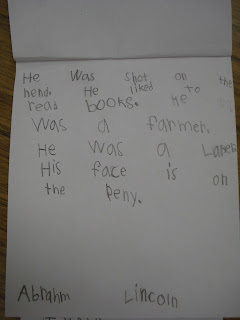 He was shot on the head.  He liked to read books.  He was a farmer.  He was a lawyer.  His face is on the penny. 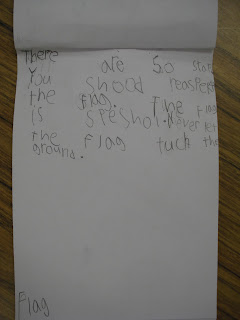 There are 50 stars.  You should respect the flag.  The flag is special.  Never let the flag touch the ground. 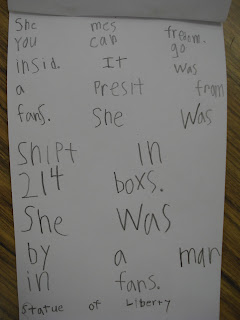 She means freedom.  You can go inside.  It was a present from France.  She was shipped in 214 boxes.  She was by a man in France. 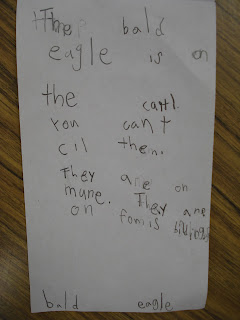 Simple?  Yep.  Effective?  I believe so.