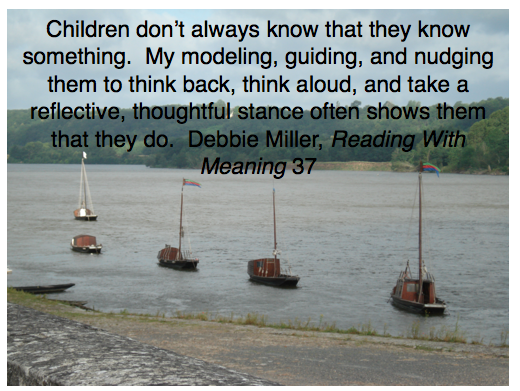 Yesterday I was thankful that 8 months ago I began the year with the words, "You're full of greatness."  Here's why.  If you've been following my journey, you've probably picked up on the fact that this has been an extra challenging year.  It's left me with many frustrations and a lot of second guessing my abilities and choices from one day to the next.  It's been a year like no other.

One of my first graders gave me such a gift yesterday when she took my own words and handed them right back. 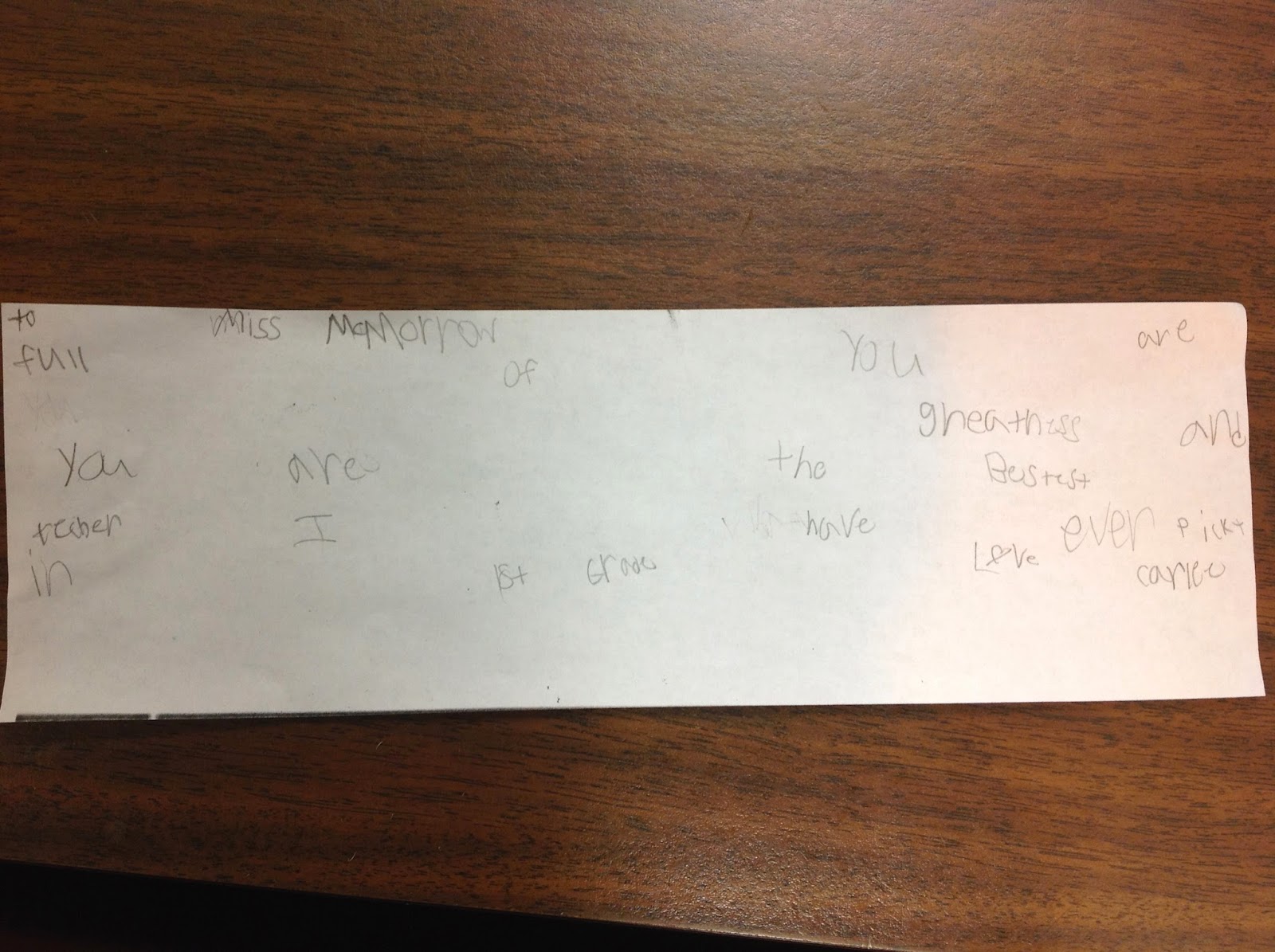 "Miss McMorrow, you are full of greatness."

(Go here to read a few posts about greatness.) 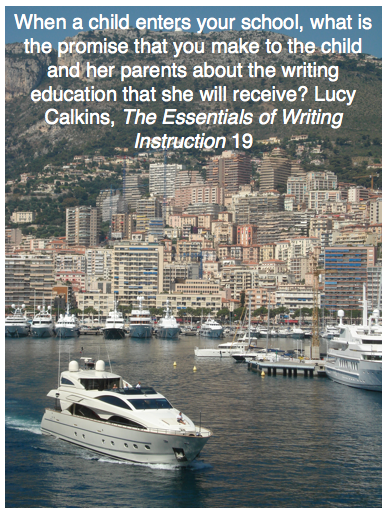 Recently my school's instructional coach asked our staff to ponder Lucy's question.  She asked each of us to make a Writing Bill of Rights, so to speak.  While I have no idea how others reacted to her request, I was thrilled.  It's a conversation we've needed to have for a long time now.  I'm anticipating what the teachers at each grade level will say  and what enlightening shifts can be made due to future discussions.  Making my list was easy.  Here's my promise to each parent.

(Did I miss something?) 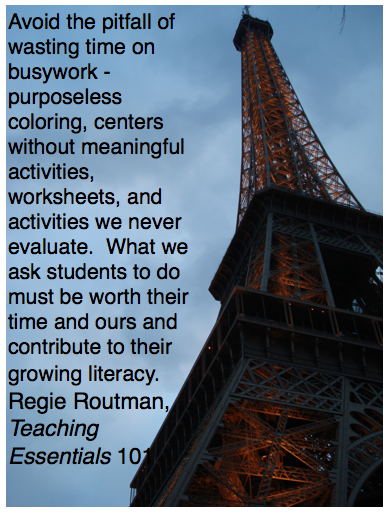 "How much crying do you allow before you just stop making your 8 year old do homework? I feel like the only thing it is accomplishing is making him HATE creative writing."  These are the words I found on Facebook this last week from a sweet cousin of mine.  My heart sank when I read this.  I thought to myself, "We've done it again."  I apologized to her on behalf of all teachers.  I might have also commented "Homework, schmomework."  Sometimes we teachers miss the mark, and as a result, our kids can suffer.  Later on down the line of comments, she said this:

"I think it's a combination of the bulk of homework he is assigned.  He's given a packet of math homework for the week and he's supposed to do an online math assignment daily. The online math doesn't take any time, and he doesn't mind it - but the paperwork is usually a large math sheet, which I could consider 'busywork' and a creative writing assignment which is supposed to be a paragraph.  It's not that he isn't creative.  It really is that he gets SO mad about having to do it.  He spends most of his time angry, frustrated, crying, anything but just writing.  The thing is...I think he would be awesome at writing, if he could write more freely.  He is endlessly creative and really intelligent. I feel like these writing cues bore him."

First off, I cringe whenever I hear the word "packet" used in an educational setting.  It oozes the thought of busywork.  I'm unsure of what packets and homework accomplish in the lives of little ones, except for, in too many cases, anger, frustration, and tears, like in the situation explained above.  I only ask my children to read every night, and I don't even call it homework.  It's just what readers like us do.  Sooner than later they'll be faced with homework of all shapes and sizes.  I don't see the need to place similar demands on them at this age.

Secondly, this little guy is immensely talented, creative, and intelligent.  He's my third cousin, and I've spent enough time with him and heard enough stories to know this is true.  He has a wonderful way with words and the writing I've seen from him proves it.  But from what I can tell, forcing him to write to prompts has turned writing into something it was not meant to be - busywork.  Like many young writers, his creativity is stifled when pushed into writing about something he has no personal connection to.  The whole experience is obviously stealing his love for writing and learning, instead of igniting a passion for how these things can benefit his life.

As Regie reminds us, what we ask of our students must be worth their time and contribute to their growing literacy.  It's fairly obvious, neither of these things is true for this little guy in this particular situation.  We simply must tread carefully.  The pitfalls of busywork will bring out the worst in our students, not the best.

I have to be honest.  I'm not sure why some young poets are asked to write poetry that rhymes.  If I had it in my brain that poetry must work that way or really any way at all, I'd write some pretty stinky stuff.  Trapped by the limitations of rhyming words, my creativity would for sure suffer, and I know the whole process would frustrate me.  (My cousin Kent can make most anything rhyme it seems, but I think he's the exception to the rule.)  For the average young poet, rules and limitations do not inspire them, and if they're not inspired, neither am I.  I love teaching poetry because of the unexpected inspiration I find in their work.  We just started our poetry unit last week and even though they still have some work to do, they're catching on.  I'm already finding little nuggets here and there. 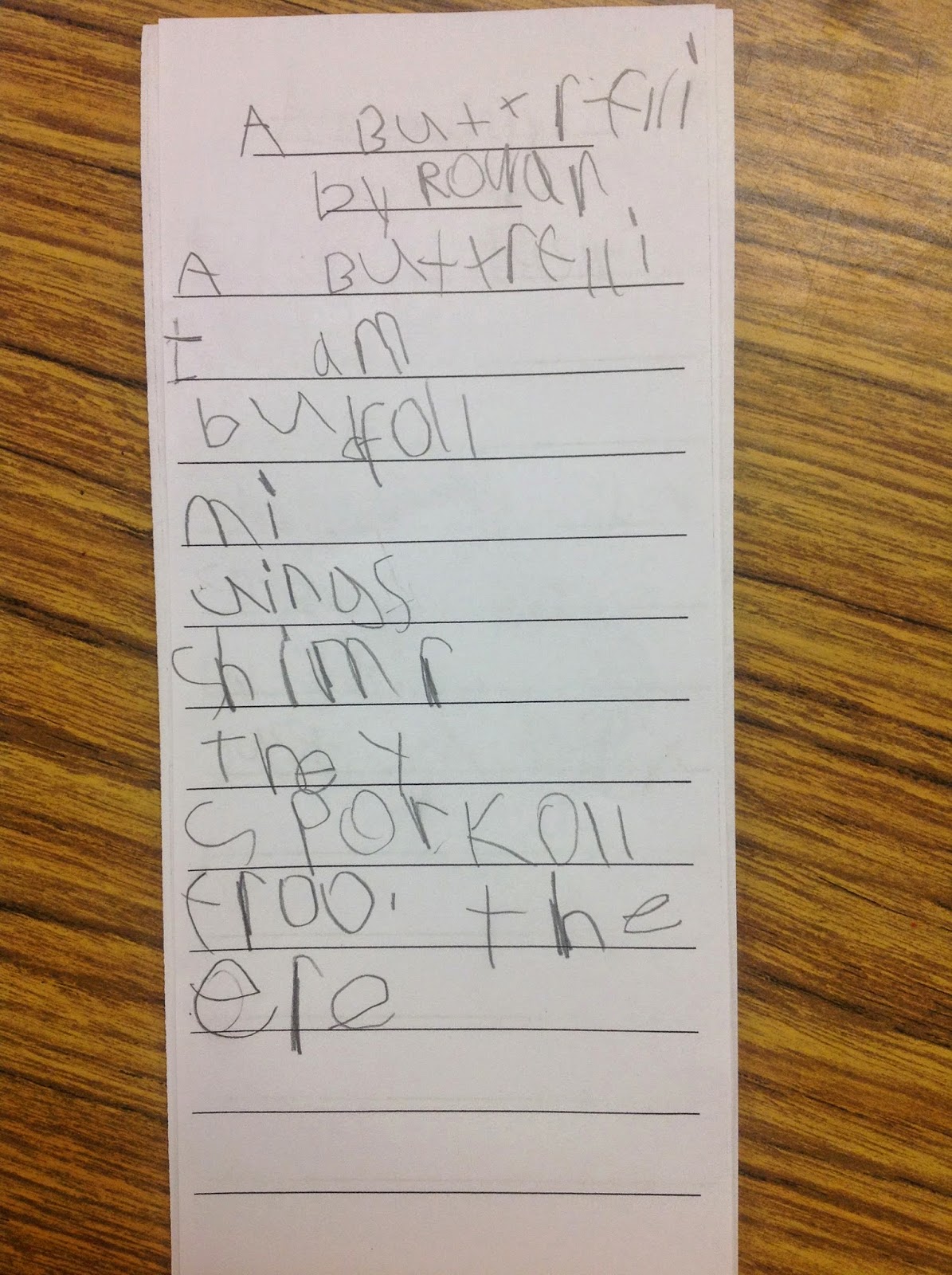 A Butterfly
A butterfly
I am
beautiful
my
wings
shimmer
they
sparkle
through the
air
(I love the word choice.) 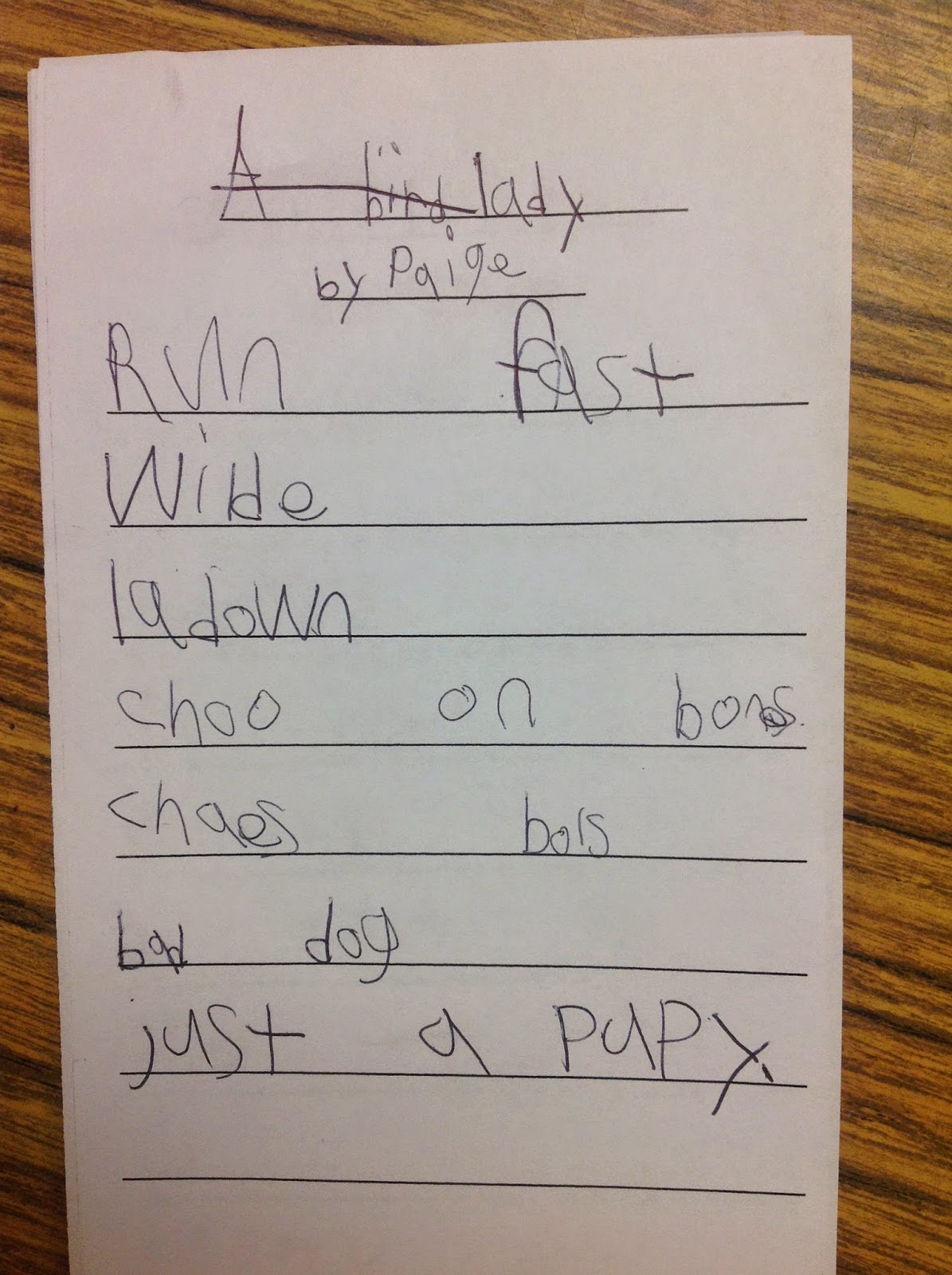 Lady
Run fast
wild
lay down
chew on bones
chase balls
bad dog
just a puppy
(What a great last line.  This comes from the writer who drew scribbles the first several weeks of writing workshop.) 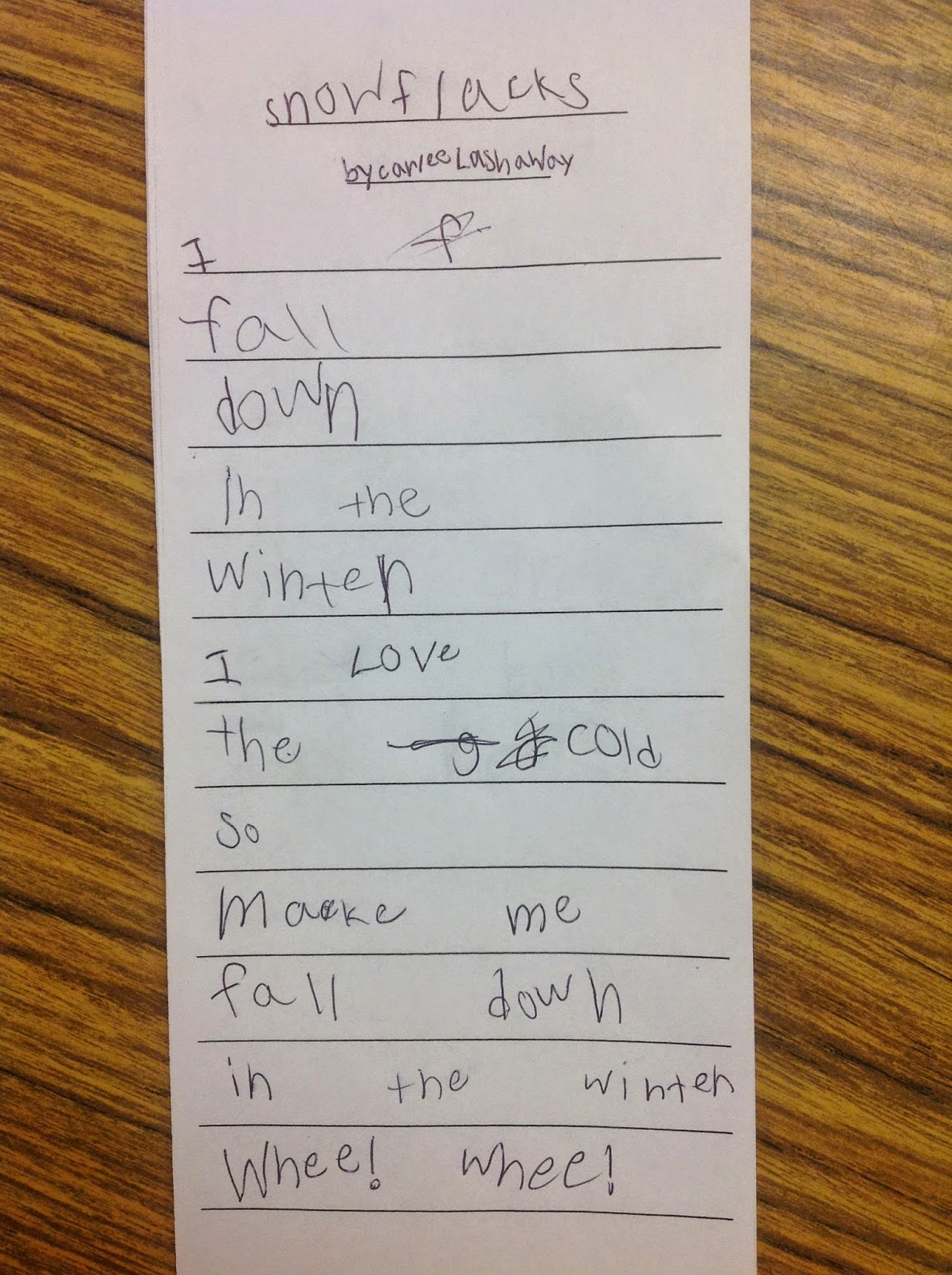 Snowflakes
I
fall
down
in the
winter
I love
the cold
so
make me
fall down
in the winter
whee! whee!
(I love how the snowflake is doing the talking.) 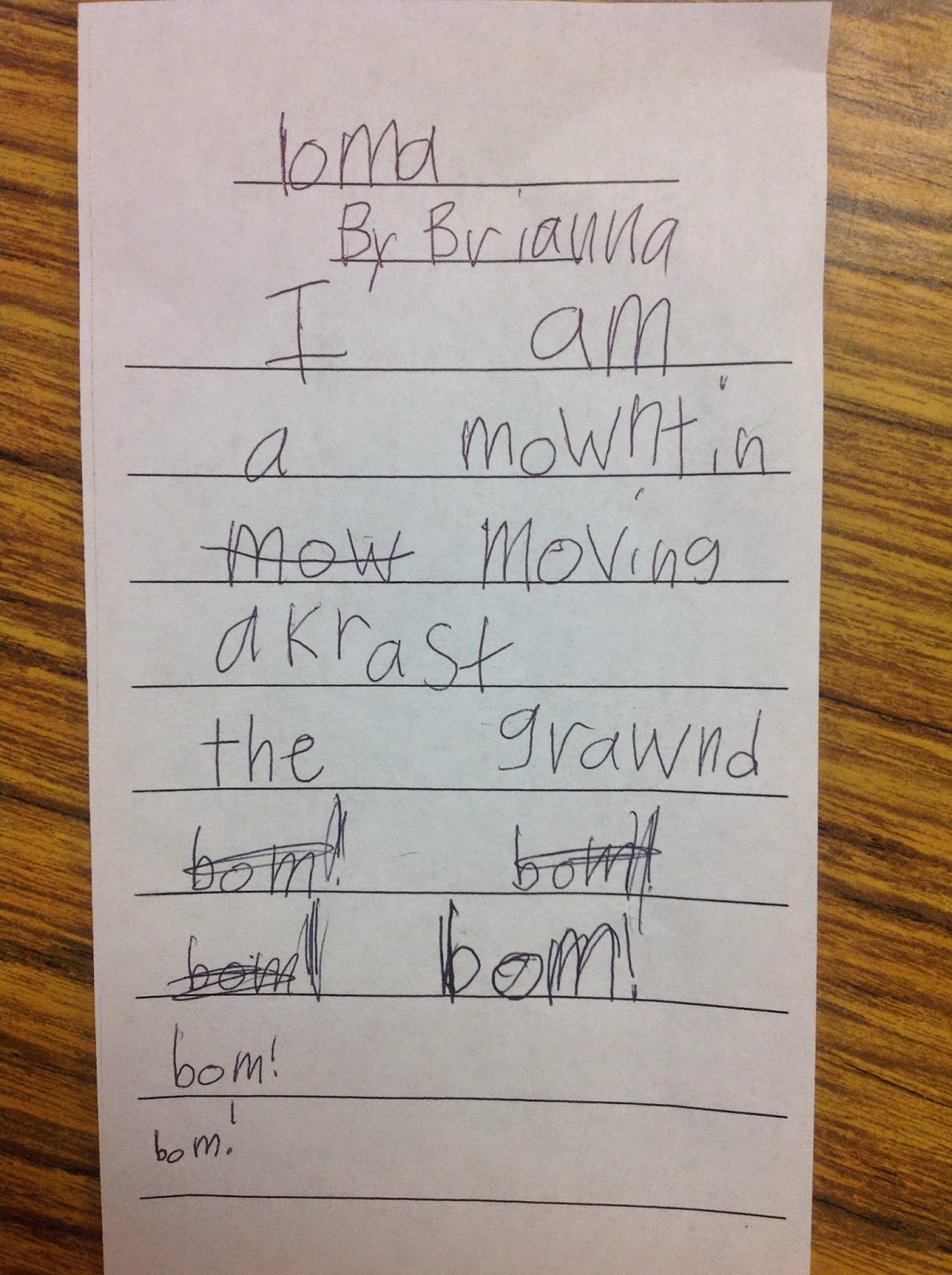 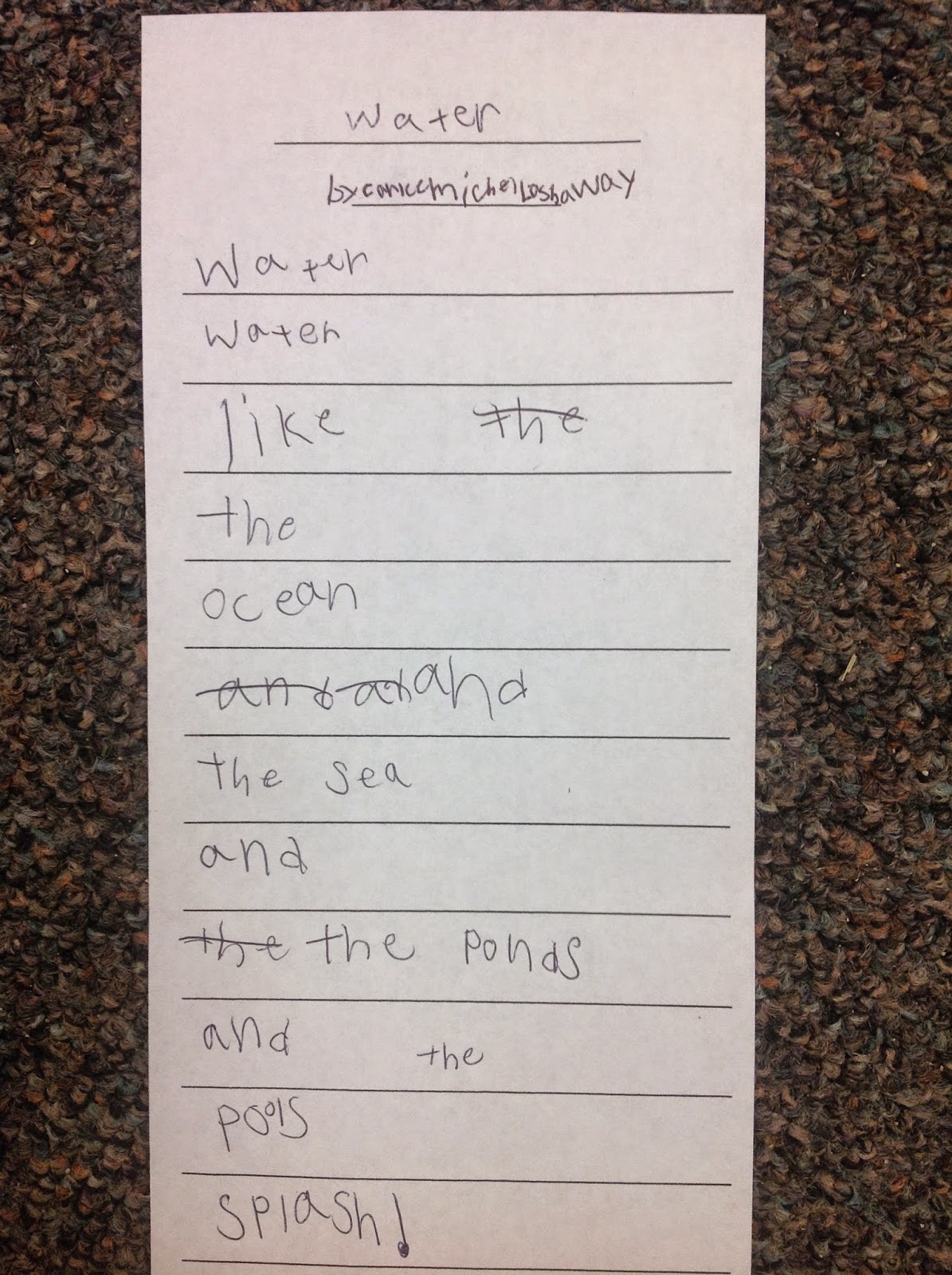 Water
Water
water
like
the
ocean
and
the sea
and
the ponds
and the
pools
splash!
(This one has great rhythm and a clever ending.) 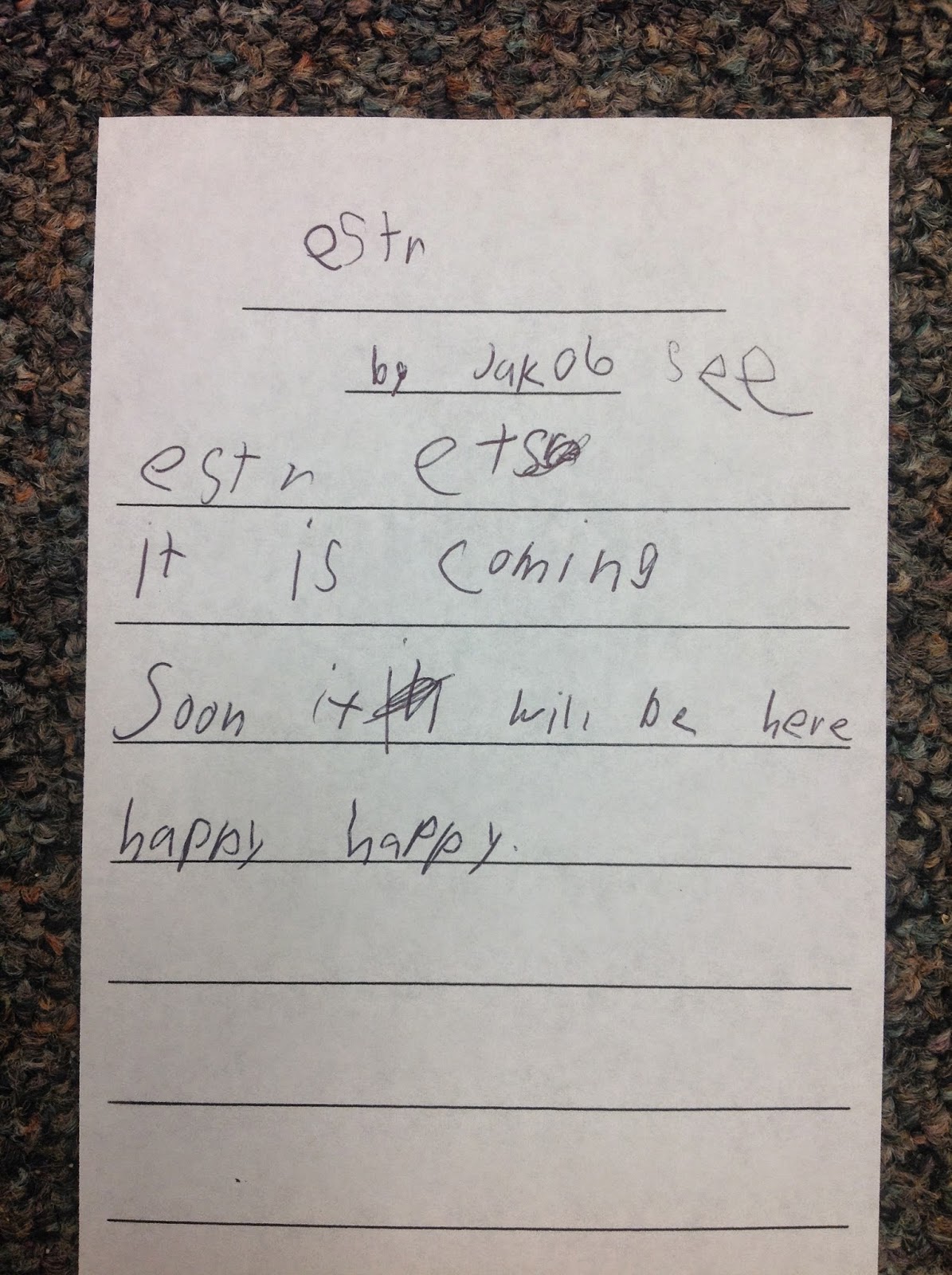 Easter
Easter Easter
it is coming
soon it will be here
happy happy
(I love the use of repetition.) 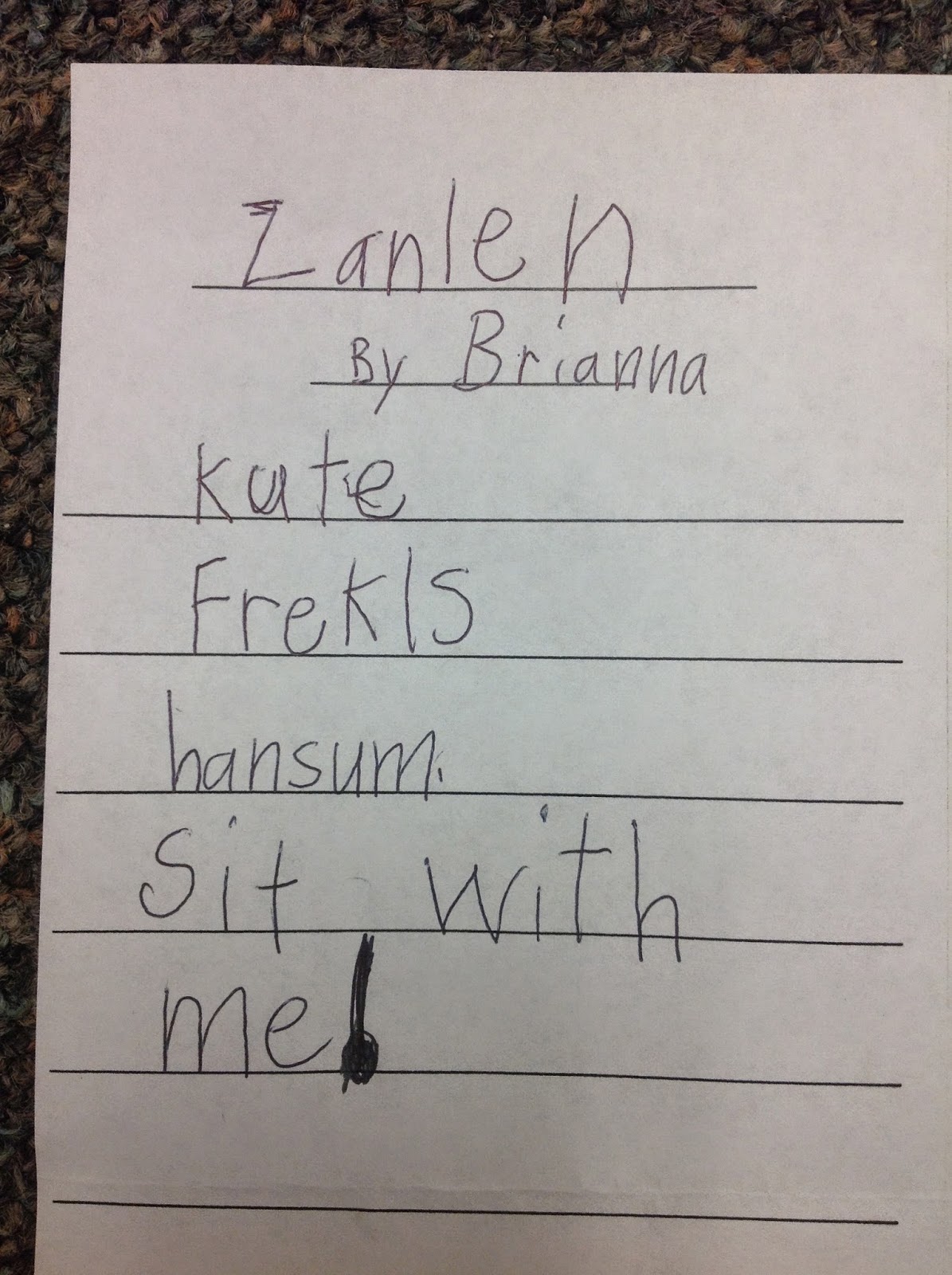 Zanlen
Cute
freckles
handsome
sit with
me!
(Seriously?  You're 7, but it is adorable.) 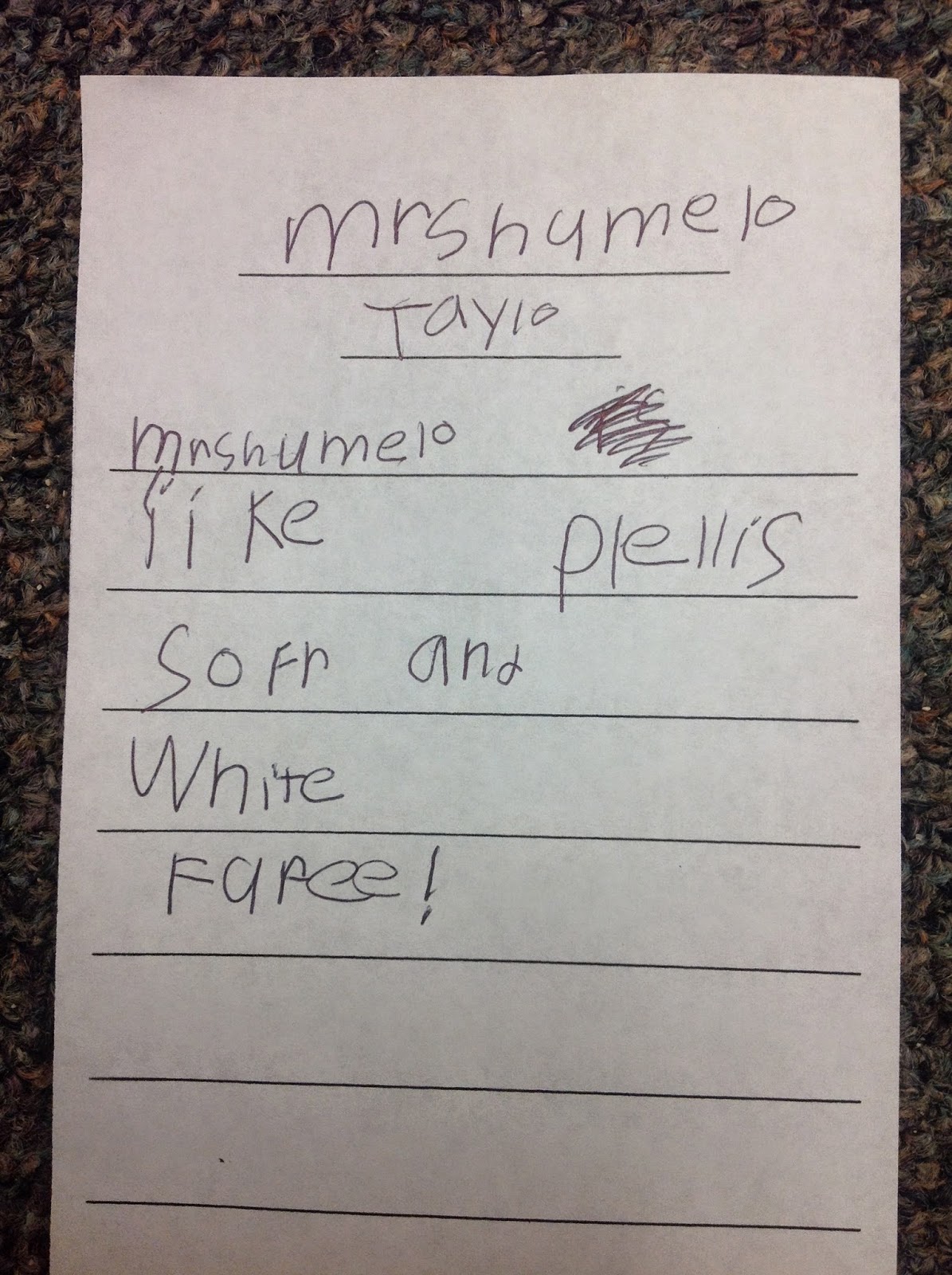 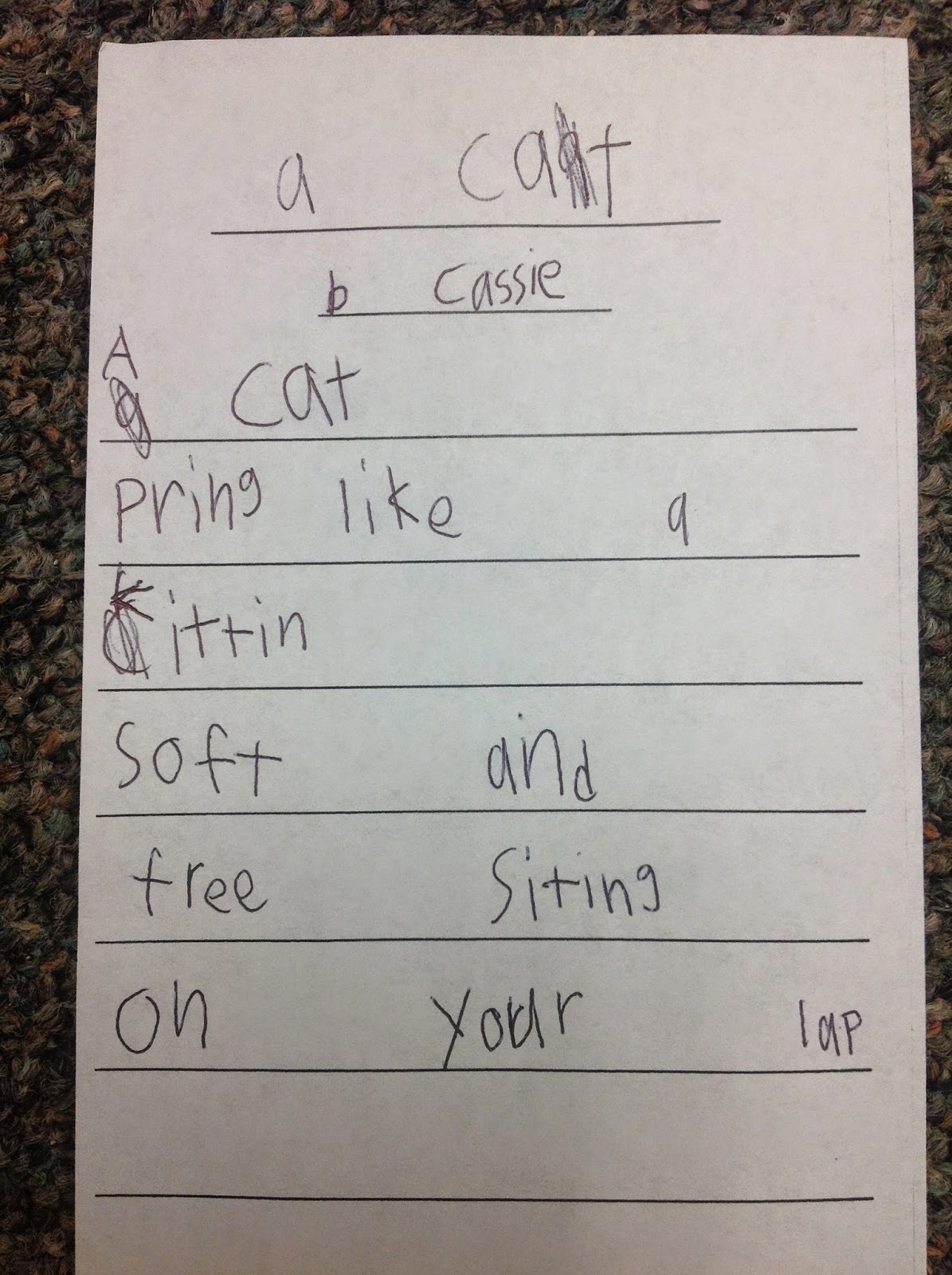 A Cat
A cat
purring like a
kitten
soft and
furry sitting
on your lap
(This was her first poem and the one that helped everyone else get the idea too.) 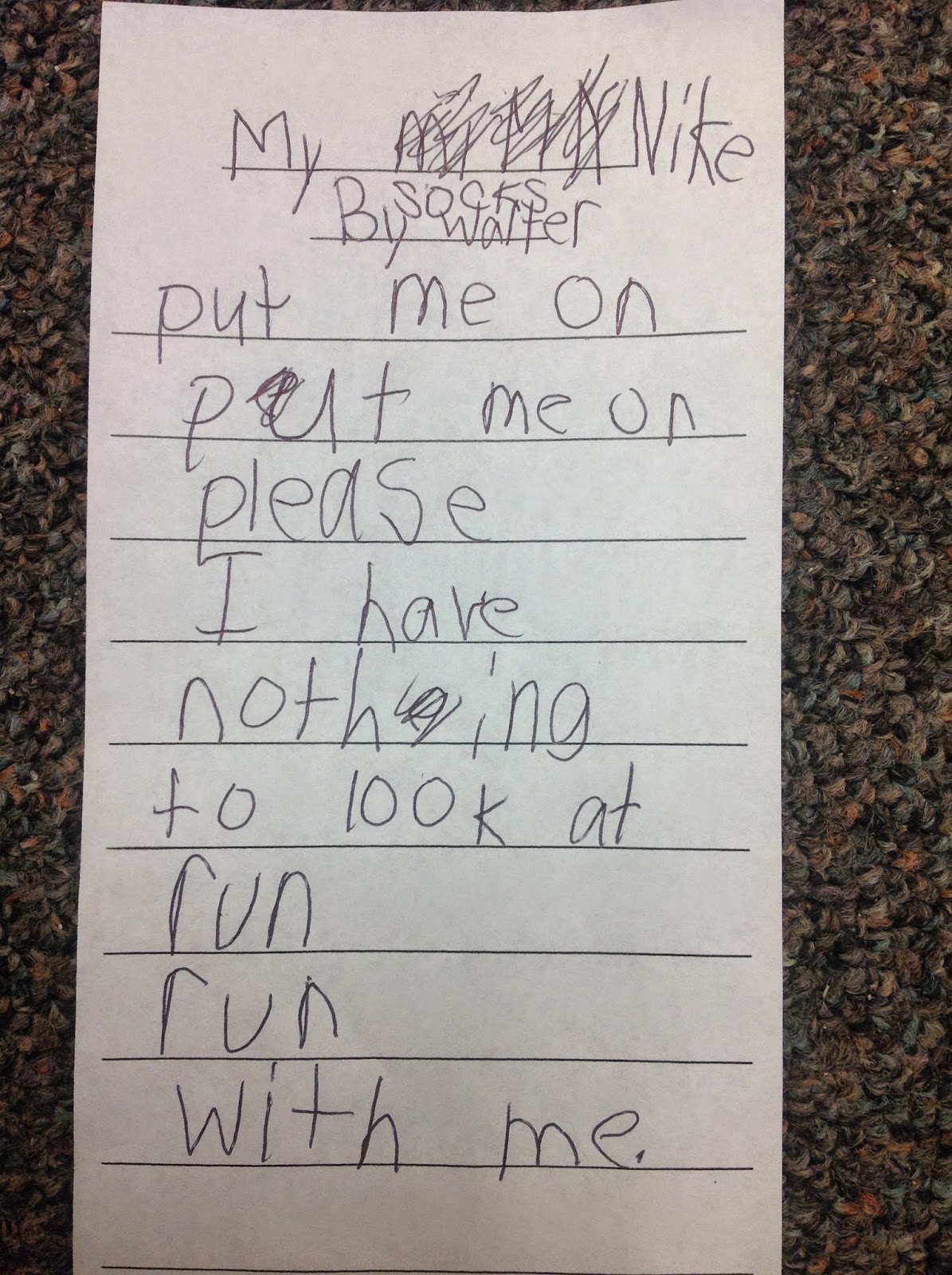 My Nike Socks
Put me on
put me on
please
I have
nothing
to look at
run
run
with me
(Being the Nike fan I am, this one is a thing of beauty.)

I'm so glad they don't think that poems must rhyme! 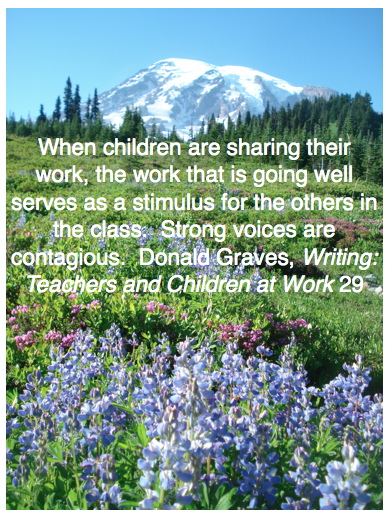 The world will have to make room for some additional future poets, because we started our poetry unit this week.  It's my all-favorite writing unit.  After two days spent simply looking at ordinary objects and jotting down fresh, new ways of seeing them, day three arrived with the great expectation that they could all write poetry.  After a mini-lesson and a shared writing experience, I let them go for it, knowing full well that many would flounder but not for long.

"Hey guys.  You've got to hear this.  Listen to the poem Cassie just wrote."  Constantly interrupting young writers during their workshop time is not necessarily ideal, but I've discovered the power of sharing what's going well while they're all still in the midst of the process.  We don't have to wait until all the folders and pens are tucked away before spotlighting what a few authors have accomplished.

When I threw them into the deep end on only day three of the unit with high expectations of "Go forth and write poetry," I knew it would require more than my mini-lessons to pull this off.  I knew they would end up teaching each other how to be poets.  And I knew I couldn't wait until author's chair to make that happen.  Sharing successes during writing time is so useful.  I want to be careful about interrupting their flow, but at the beginning of a new unit, especially one like poetry, it's pivotal that they hear what's going well with other poets.  As the quote says, their breakthroughs are contagious.  After reading Cassie's poem came the words, "I bet you could try that too."  And some of them indeed did.  Glad I didn't wait.

What Time Is It?

I've got another classroom book to share.  Last year I made a similar book about the concept of time with watches we made.  Check it out here.  I wasn't in the mood for watches this year and didn't really have time anyway.  Instead each child held my big yellow clock.  By the way, each of their times was different and matched Common Core standards for first grade.  Enjoy! 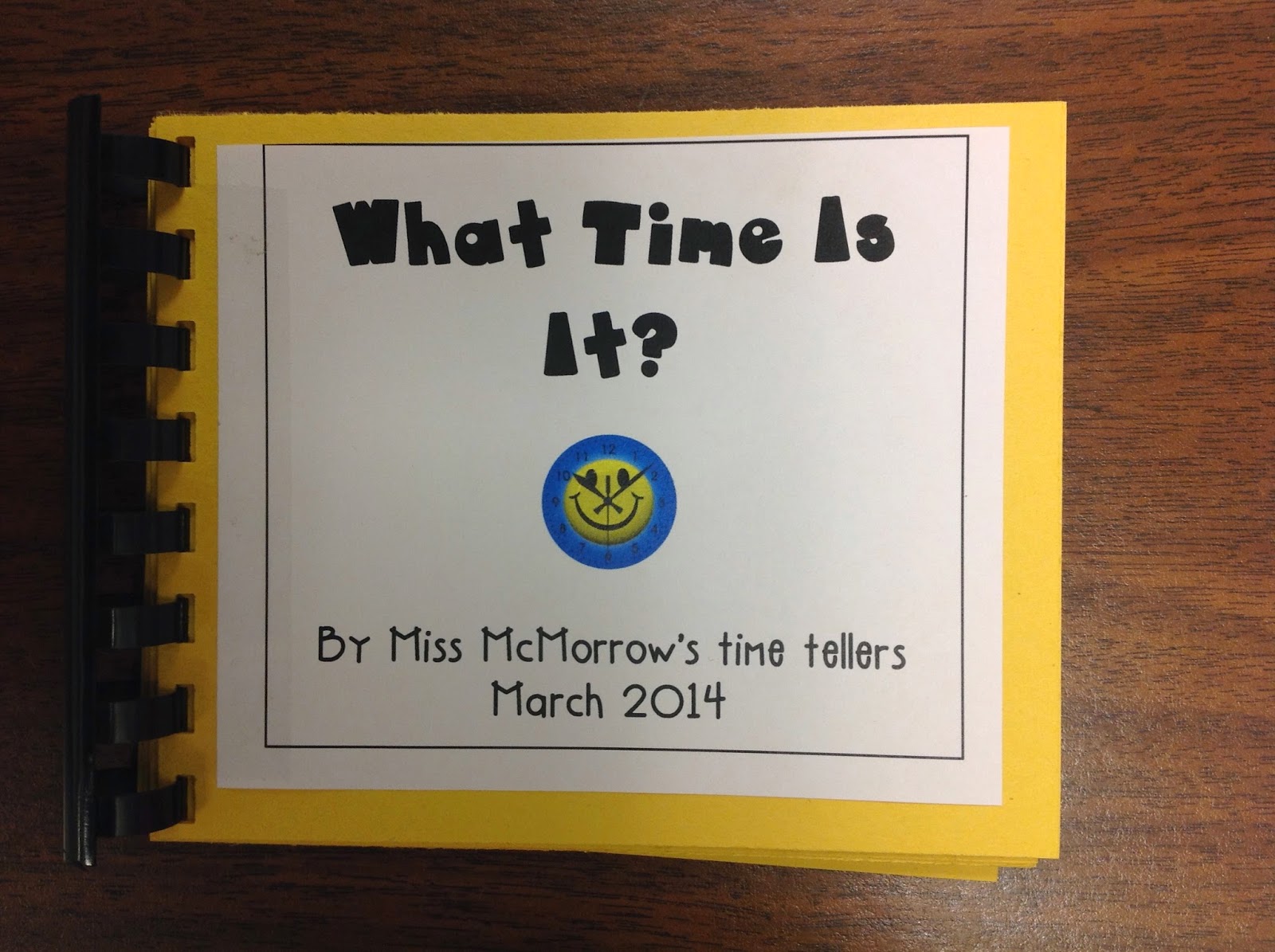 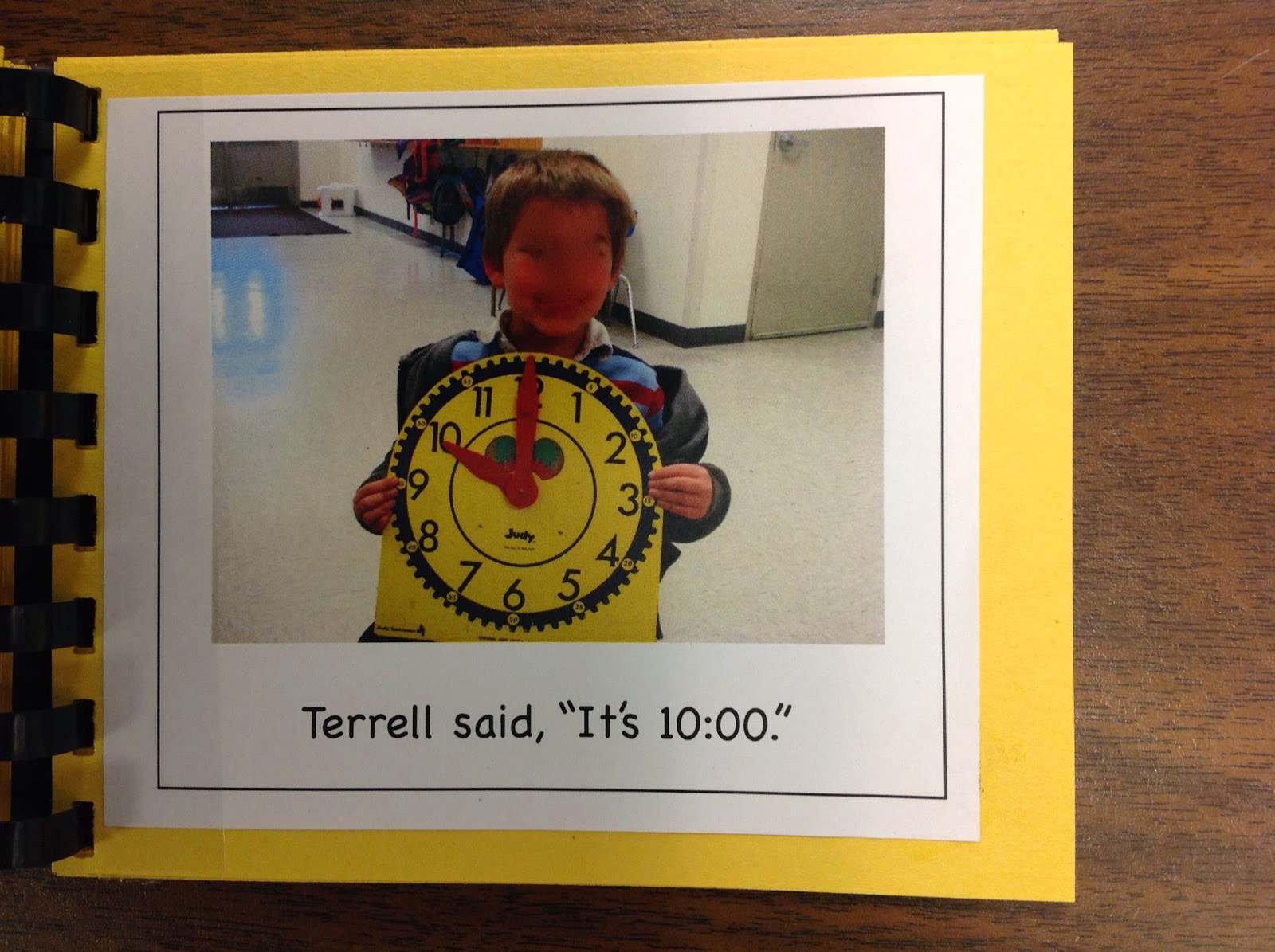