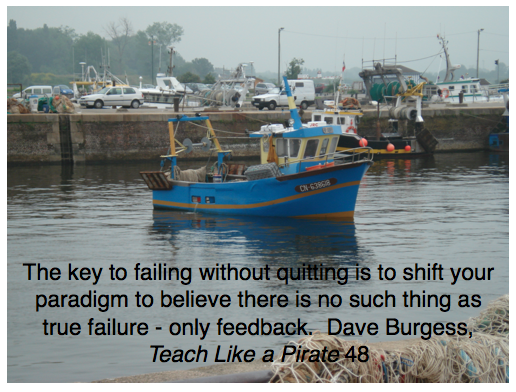 I had one of those moments this week of thinking, "Nope, won't do that again."  I thought I had a creative art lesson on my hands, integrating their names with a Pinterest project I found.  There were simply a few pivotal aspects of the morphed product I envisioned in my head that I hadn't taken into consideration before putting it into the hands of first graders.  It was a classic moment of "This is what it looks like on Pinterest," and "This is what it looks like in real life."  I'm happy to say the kiddos were very much engaged and proud of their finished products though.  They reviewed letters, specifically vowels, as well as syllables.  They learned how to properly use glue bottles too, which is a coveted skill in a first grade teacher's life.  It wasn't a complete waste of time.

Failure viewed as feedback comes my way on a fairly consistent basis, but I know how to give myself a break.  This is one of the gifts I've learned to generously grant myself over the years.  Without it, I would have considered myself a failure years ago.  It's a must-have in the classroom.

I've heard of the teacher who wouldn't have easily recovered from a lesson like the one I described above.  They would have been so engrossed in frustration that they couldn't reflect on what went well or the changes they might make.  Self-critisism is a tough place to grow from though.  It's paralyzing.

Instead of stopping me in my tracks, feedback has the potential to propel me towards better practices.  In fact, my students and I are continually benefiting from my failed moments of years gone by.  Those experiences have left a positive stamp on my practice.  Honestly, I can think of a few that do make me cringe, and for a second I'm tempted to stop and hover in the moment, but mostly, I try to embrace the thankful thoughts of knowing I've grown from the feedback.  I'm expecting many more nope-won't-do-that-again moments, but knowing they don't equal failure but instead equal movement forward makes them much more bearable.