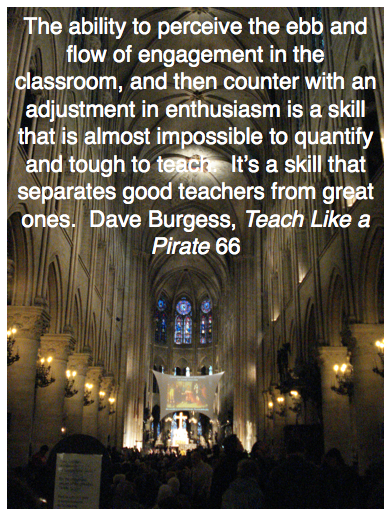 Yesterday Lauren shared her Me in a Bag with us.  After her presentation, I asked her what her audience did well.  She told the class she loved their smiles and the way they were able to appropriately comment at the end.  She also enjoyed the way they consistently nodded.  As a presenter, which is exactly what I called her, she had it easy.  I taught her audience to do all those things she noticed and appreciated.  If only all audiences were as responsive.

But it's not always the audience's fault.  I've agonized for the presenter who didn't seem to notice they'd lost the crowd.  They obliviously plowed right ahead, dragging everyone else along.  Dave Burgess is right.  Some speakers or teachers, in this instance, have what seems like an innate ability to know when they need to take their audience to a different place.

I have to be careful when I say this, because I don't want it to be taken the wrong way.  I only say it to make a point.  I've heard classroom observers remark that I make teaching look easy.  What they don't know is that I'm doing about a million things at once.  There's nothing easy about that.  One of the million is simply keeping a crew of little people engaged.  I'm a pretty Even Stephen personality type in real life, but in the classroom I can become someone else.  I can ramp up the enthusiasm for sure.  I'd like to think I've got some of the innate ability that Dave Burgess mentions, yet I guarantee there are moments when I'm simply good at what I do instead of great.  When my audience sends me signals I don't have the energy to attend to, and I plow ahead instead of taking them to a different place, I'm just good.  Dave Burgess claims to be "on" 100% of the time and I believe him.  Some might say that's all pie in the sky and impossible to achieve, but in my book it's a worthwhile goal to shoot for.