Saturday Sayings: Day In and Day Out 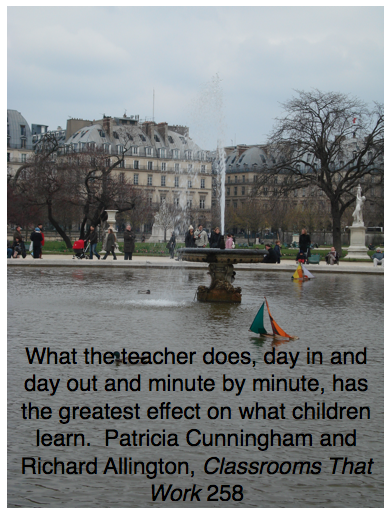 This week I attended an emergency school board meeting with around 300 other people to hear what the community thought about our recently failed levy.  The school board had three options:  run the levy again in May, run it in August, or leave it be and let our budget committee figure out what stays and what goes in order to make up for a loss of about 3 million dollars.  Three million is a lot, especially for a district like mine.

Over the years I've heard rumors about how poor the funding is in my district but nothing ever seemed official enough to quote.  All of that was confirmed by our school board chairman at the levy meeting.  He reaffirmed that Idaho is the second to the lowest state for funding and that my district is one of the poorest in the state of Idaho.  Do the math.  That would put my district towards the bottom of the barrel in the whole country.  So the rumors are true and worse than I could have imagined.

Yet I don't believe a stranger would walk into my school or my classroom and feel sorry for my students or me.  Maybe it's because I've spent all 20 years of my teaching in the same district and don't know any better, but I don't think we act like we're poor or disadvantaged.  We educate and inspire just like anyone else.  Having said that, I notice the perks of working in some of the nearby richer districts, and at times, I salivate.  What would it be like to have the resources they have?  But I have 20 years of proof that I, the teacher, am what really counts and makes the difference day in and day out.  Cunningham and Allington are right.  For good or bad, what I do in my classroom from 8:10 to 2:35 matters the most.

Granted, money helps.  The money to pay for more teachers to bring down my teacher-to-student ratio of 1:25 would help immensely.  We need our 3 million, but money doesn't guarantee good teachers and good teaching.  Poor teaching occurs in rich districts as well as in poor ones.  What's important is that my students have no idea there are rumors about their district and that the rumors are true.  The quality of instruction is what should protect them from those facts.  I plan on keeping it that way.