Saturday Sayings: Beat Me to the Punch 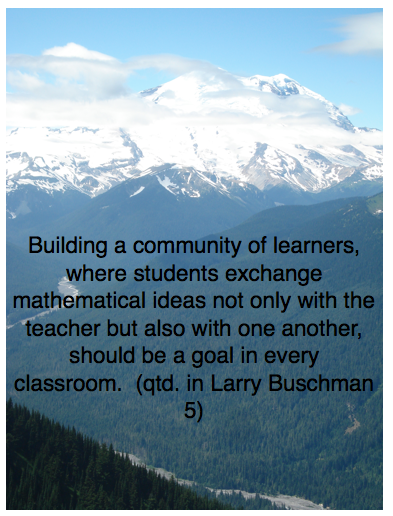 I love this NCTM quote from Larry Buschman's book Share and Compare.  I saw it play out more than once this week while working on the concept of time.  (If you need some quality clock lessons grounded in understanding instead of memorization, go here.)

I've still got much to learn about questioning kids and ensuring they are doing most of the talking, but my goal is to purposefully orchestrate discussions so the children are discovering and not simply receiving information from my great wealth of knowledge.  In one instance, we were investigating a numberless clock with only a minute hand.  As I moved the minute hand to a numberless spot on the clock, we would figure out how many minutes it was past the hour.  Of course, I didn't tell them there was an efficient way of counting the minutes.  I knew someone would figure it out.  Not surprisingly, Walter chimed in and explained the way he thought we should count them, by 5s of course.  We dubbed it, "Walter's strategy" and I consistently referred to it throughout the remainder of the lesson.  As we were transitioning to another part of the room for additional practice, Michael had to tell me something. "Miss McMorrow, Walter's strategy really does work!"

I don't believe I've ever heard them say, "Miss McMorrow's strategy really does work!"  It's not that they don't believe me or can't learn from me, but there's something extra poignant about moments when they learn from each other.  If the teaching comes from one of them, there's a better chance that they'll grab on to it more quickly than if it was something I mandated.  If it comes from Walter, they know it's worth listening to, and he's not the only one.  They've heard me say many a time, "I'm not the only math teacher in here.  This room is full of them."  Sometimes we simply need to remember to let them beat us to the punch.  The others will listen when we do.  Something clicked for Michael when he heard and practiced Walter's strategy, and I'm pretty sure he wasn't the only one.