When it comes to writing workshop, I'm all about focusing on content and looking beyond surface issues until the right time and place. Fortunately, there are moments outside of writing workshop that are perfect for fixing some pesky problems that can impede the readability of their daily writing.

One of the issues that is bound to be a problem every year for a random few writers is putting too much air between letters in a word. The space isn't quite as dramatic as what might or should be used between words, but it's enough to become a problem. I'm not sure if other elementary teachers see this as predicament, but I think it creates issues with readability, especially if spacing between words is  already troublesome. So several years ago I invented a phrase that helps with this dilemma.

Your letters should be close enough to kiss. 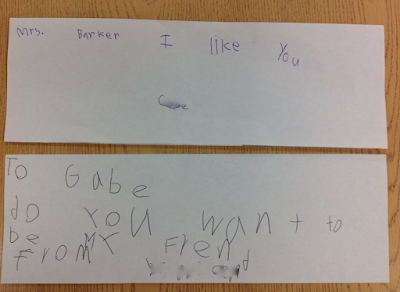 In the note at the top, the letters in each word are close enough to kiss. The second note has spaces between each letter. To the casual observer, it might not seem like such a big deal, but as someone who reads their writing on a daily basis, I know firsthand how the habit of putting space between letters, like in the note at the bottom, leads to readability issues.

So the answer is, "close enough to kiss." It might initially induce some giggles, but once they get over it, it works wonders.