When you think about it, the majority of kids do us big favors by doing what we ask of them.  When it comes right down to it, you can't make anyone do anything. In first grade, many kids haven't figured that out yet, so for the most part, they just play along.  Phew.  Oh, but there are those who have discovered their free will and sure enjoy pushing the limits by finding out if we teachers really mean what we say.  Take, for example, the arguers.  They've got it down to a science, and what happens when the teacher argues back?  They find themselves sucked into a battle they hadn't anticipated fighting, and once they're in, it's hard to get back out.  At that point, the child has pretty much won.  I know.  I've been there.

I've had some training that's given me a plethora of great tools for situations just like this.  Have you heard of Love and Logic?  I don't have time for details now, but maybe later.

Love and Logic has the best one-liners around.  When a child argues, teachers typically argue back, ignore the child, or fumble for the right magical words to remedy the situation.  Here's what Love and Logic suggests:

This typically doesn't go on for too long actually.  Children don't like playing this game and usually give up.  If every time they argue they hear, "I like you too much to argue" they tend to argue less.  I hear it even works with family members, so try it out this summer (insert word "love") and make it your pat answer for every argument that comes your way.  It will save you a few battle wounds at home and at school! 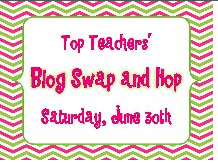 ...just a little something to look forward to.