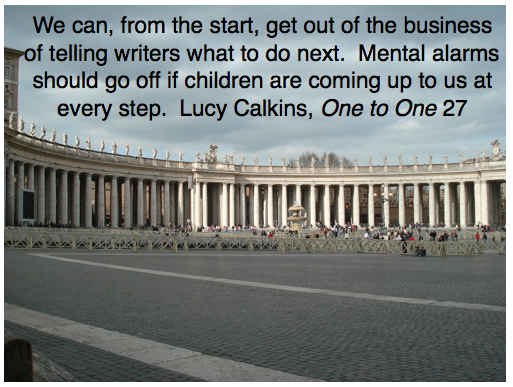 Maybe this thought would be a better one to think about at the start of the year.  It's those pivotal beginning months of training that set our writers up for success for months to come.  Or possibly sharing it now is the perfect time.  If Lucy is describing the situation as it stands today, then make a major mental note of how crazy this makes you feel.  Seriously.  Whether it's writing workshop or some other independent part of the day, it would drive me loony if my kids were needing support at every step.

I've mentioned this before, but I remember the olden days when a writer would finish a piece and then wait for me to read it.  I had my hands on everything they wrote.  I was literally in their business at every step.  I'm fairly certain I thought I was doing them a favor, but in so many ways the opposite was true.  Obviously, when there's sitting, waiting, and downtime while waiting for the teacher, there's not nearly enough writing going on.  They need time to practice their craft, and I was stealing it from them.  Not to mention, downtime equals a management nightmare.  Neither were they were independent writers.  They didn't literally come to me at every step, but I for sure came to them.  It was so long ago I don't remember all the nitty-gritty, but after reading their piece, I'm fairly certain I told them what to do next.  All this must have drove me crazy.  Talk about mental alarms.

Now my writers don't even think about me when they're finished with a piece.  They automatically start another.  "When you're done, you've just begun."  Thank you Lucy Calkins for those words.  The moral of this tale is to pay attention to mental alarms.  Sometimes we put up with the crazy and don't notice the poor foundation that's causing all the fuss.  Maybe these mental alarms can become mental notes for a better start to the coming year.  Our goal can be a room full of kids who don't even think about us from one step to the next.

Before you go, a blogging friend of mine, Kimberley from First In Maine, is starting a new series on her blog.  You're welcome to be a part.  She never fails to get me thinking about best practices and why I do what I do.  You should go check her out by clicking on her graphic below. 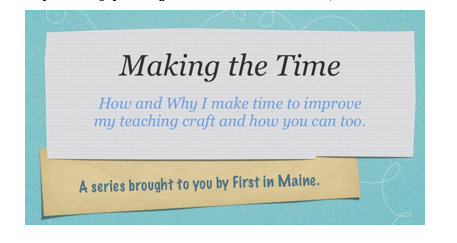