There's something empowering about giving young mathematicians the opportunity to wrestle with math in a way that invites them to invent the strategies that end up teaching the rest of the class how to think more efficiently.  I suppose it kind of seems backwards.  The strategies come from the students instead of the teacher?  Yep.  It's certainly a new way of thinking for me and requires a step of faith, but I've found it to be a powerful approach to math.  When pressed conceptually instead of handed strategies on a silver platter, they do rise to the occasion.

I posted about my approach to contextual problems and math journals here, so I won't go into a lot of detail.  Basically though, when given a contextual problem, the kids attack the problem without any preconceived ideas from me.  In fact, they're encouraged to try several different ways of solving the problem.  I always say, "When you're done, you've just begun."  While they're working, I choose a handful of kids to draw their strategies on the board.  Those kids eventually explain or teach their strategy to the rest of the class at the end of the lesson.

I'm always on the lookout for strategies that will challenge the majority of kids to think more efficiently.  If one of the strategies drawn on the board does just that, I take a picture of it, enlarge it, give it a name based on its owner, post it on the board, and refer to it often.  Look below to see what I mean. 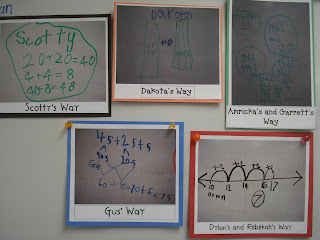 Let's take a closer look.  This is basically the order in which the strategies arrived throughout the year. 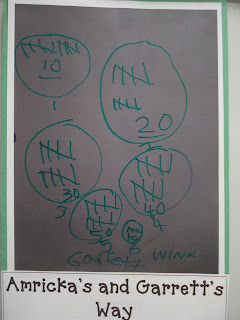 Amricka's and Garrett's way became useful at the beginning of the year when the kids wanted to draw 60 of something.  Pictures are a great tool when you're barely a first grader, but when numbers get big it's not so efficient anymore. 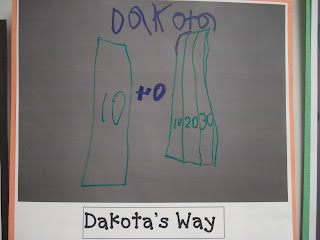 Dakota's Way eventually showed the kids that there's something even better than tallies.  Drawing groups of ten is much easier than drawing tons of tallies. 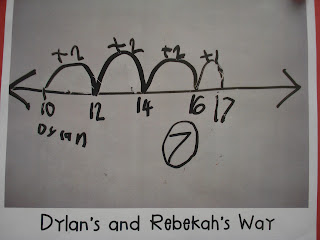 Dylan's and Rebekah's Way came later in the year and gave them another tool for solving problems both large and small based on the idea of the open number line. 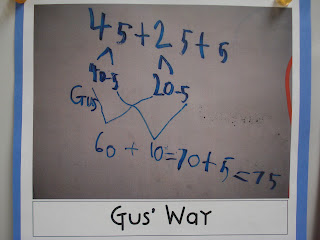 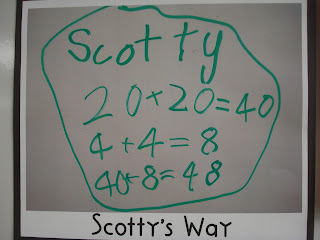 Scotty's Way actually showed up early in the year.  It demonstrated that mathematicians explain their thinking with equations.